These Countries Are the Most at Risk From a Water Crisis

Nearly 1.8 billion people in seventeen countries, or a quarter of the world’s population, appear to be veering towards a water crisis—with the potential of severe shortages in the next few years.

Of the 17 nations, 12 are in the Middle East and North Africa, according to an analysis released on Tuesday by Washington D.C.-based World Resources Institute’s Aqueduct Water Risk Atlas. Two countries–India and Pakistan­­–are in Asia. The remaining hotspots are San Marino in Europe, Botswana in Africa and Turkmenistan in Central Asia. 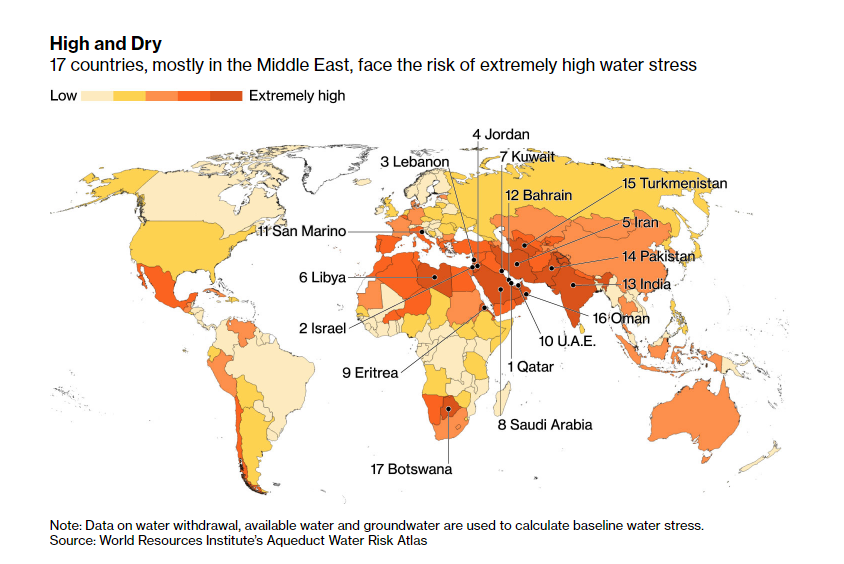 While the Middle East and North Africa region is hot and water supply can be low to begin with, rising demand has pushed countries into extreme stress, according to WRI. Qatar, the most at risk from water scarcity, depends heavily on seawater desalination systems to supply drinking water to people and industries.

The economic impact of severe water shortages came to the fore earlier this year in the south Indian city of Chennai, home to 7.1 million people. Heat waves and a monsoon delay in the summer months saw some of Chennai’s freshwater lakes dry up, triggering protests and violence, as well as business interruptions, with tech companies asking employees to work from home.