Proposed focus area for XPrize: Advance power beaming technology that enables the movement and distribution of energy over relatively long distances without requiring wires or the movement of mass. Set quantitative, empirical goals for power delivered safely to the user (e.g. 5 kW) and minimum distance (e.g. 5 km). This supports developmental, diplomatic, and defense goals, including many of the UN’s SDGs. Longer term, this technology is a critical prerequisite for the viability of solar power satellites, which could revolutionize energy for humanity. More info:

SPACE SOLAR POWER The Way Forward for Clean, Limitless Energy The sun provides limitless, clean power every moment of every day. What we need to do now is more effectively harness it to reduce our reliance on fossil fuels and help our planet to...

Thanks @pjaffeva for adding this discussion. A very Interesting topic. It presents a critical and disruptive opportunity to ensure reliable energy in undergirded areas.

@pjaffeva -
I’m feeling bad this post somehow escaped my attention. I believe it’s a major breakthrough we definitely want to bring about. Power beaming technology could not only replace some wired systems on Earth, but also enable power transmission between far- and low-Earth orbit solar satellites. Those satellites could then concentrate the energy and beam it down at high resolution - maybe even to individual neighborhoods or large buildings.

In short, this technology will revolutionize the domain of energy.

I agree that long-distant wireless energy transmission technologies are important, and am also curious about how to ensure the safety if these “beams” are invisible for third parties.

Safety has received the critical attention it deserves, and it has been demonstrated in hardware that robust safety can be achieved:

That would be cool. Also wondering what the efficiency of energy transmission currently is? 10%, 20%, 50%? And the theoretical limitations, if any?

ance power beaming technology that enables the movement and distribution of energy over relatively long distances without requiring wires or the movement of mass. Set quantitative, empirical goals for power delivered safely to the user (e.g. 5 kW) and

@Shashi there is indeed great potential for this for Earth and beyond. I would share many of the concerns here about safety though, but perhaps we could start by proposing power beaming among satellites in outer space to reduce risks.

End-to-end, efficiencies have been in the 10-20% range, but the focus has not been on maximizing efficiency as much as it’s been on demonstrating practical power and distances. The theoretical end-to-end limit is upwards of 70%. 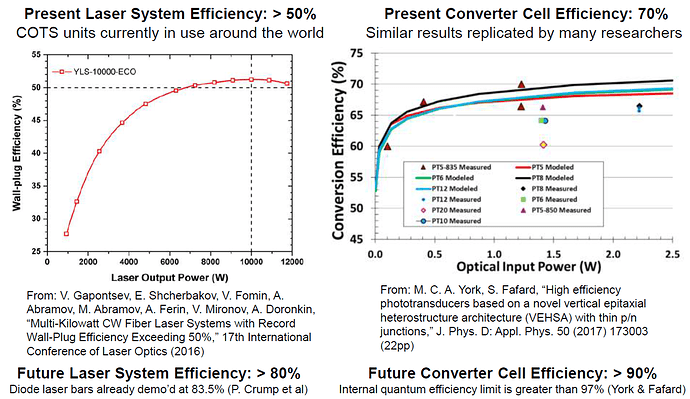 It’s quite inefficient as expected, for the current condition. You probably want to focus on demonstrating practical power and distances, but may the efficiency issue be left for challenge designers and see if they want to include it?

Hi @Ruslana, @ikuzle, @emvhoek, @Magneto, @wjcarmack, @Stevenfawkes - What do you think about the Power Beaming technology and the comments so far? Do you think it is an important area for XPRIZE to focus on for its next $10M prize?

It may be that the efficiency of power transmission through Earth’s atmosphere doesn’t need to be high. If we have enough satellites orbiting the Earth and harvesting solar energy for nearly 24/7, then there will be enough power to transmit to Earth that we could ignore some inefficiencies.

In this case, I agree, and it can link back to the discussion about Dyson spheres.

Hi @akb, @agval, @bernardsaw, @gyyang, @AnthonyMburu and @mikelandmeier - What are your thoughts on power beaming? Is this technology a critical prerequisite for the viability of solar power satellites?

Do you think its an important area for XPRIZE to focus on for its next big XPRIZE? if so, please vote for this topic.

This seems like a potential innovation that falls into the good, bad and ugly categories. Power beaming in space might have a greater (and safer) role within the context of space, rather than on Earth. However, such a technology has the potential to be adapted for bad uses [remember the Star Wars concept, and the alleged abuses of (microwave) energy on the human brain?] and such concentrations of power raise serious questions about its safety across all real world scenarios [it was recommended that young children avoid the use of mobile phones - which are at power levels orders of magnitude less than the proposed power beaming].

So in short, potentially useful for space based operations, but significant potential risks arising in other areas. As an advocate for good innovations (only), personally I’m hesitant to recommend this as an XPRIZE, and I suspect the foundation wouldn’t want to be associated with an innovation that might later have bad or ugly outcomes.

I appreciate the importance of power density. I would argue though that this is actually a great opportunity for an XPRIZE, as power beaming is distinct from the technology of directed energy, which explicitly aims for the disruption or destruction of a target. Directed energy technology already has decades of research and billions of dollars of government investment. Power beaming does not. A key difference for power beaming that makes it XPRIZE-worthy is that it can be stipulated that any submission must meet accepted safety standards for accessible power density (IEEE C95.1 or ICNIRP). For power beaming, there is the opportunity to enlist cooperation between the transmitter and receiver to ensure the link is operated safely and effectively. This has been demonstrated before, but the power levels and distances need to be increased - a perfect X-PRIZE opportunity.

@jasonsalfi, welcome to the XPRIZE Community! I thought you might be interested in this discussion. If you agree it has potential for an XPRIZE competition, please give this a vote!

@pjaffeva - I understand your points, but wouldn’t you agree that any contribution to the science and engineering of power beaming, could later result in the formation of a technology that could indeed be used by the military?

I do agree, but I think the same can be said about bulldozers, airplanes, and electricity. Each has been used for both military and non-military applications, and in different circumstances both to improve the condition of the world and to degrade it. There are not too many technologies totally devoid of military utility or that are incapable of being employed in ways that are “bad.” I think that having a lack of military utility is not a good criterium for identifying XPRIZE opportunities given the tremendous potential of many of the technologies concerned, as is the case with power beaming.

Now that we’ve entered the breakthroughs stage of the program, I think it’s worth discussing this there, so I’m moving the discussion.