Click here to learn more and start a team. Join the community to get involved in our other prize designs. 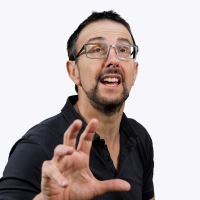 Wingham DirectorPosts: 4 ✭
April 7 edited April 7 in Prize Design
Hi All, I don't want to sound like a broken record. But discussions here really are focusing on the “J” word (Jobs). Is there room to consider other scenarios? Here’s some thoughts…..

I know we would like to see everyone with low-skills back in secure employment. But it may be a tragic reality that the pandemic will further accelerate an unstoppable trend towards low-skill breadwinners having to piece together earnings from diverse, precarious, sources of employment.

Unfortunately, it may be that no amount of training will stop this: it’s a demand-side issue, not a shortage of qualified supply.

Even if quality jobs were coming back for this workforce, it will take time for traditional employment to rebound from the slump. Businesses will likely hire incrementally, relying on on-demand workers for as long as possible.

I urge you to acknowledge this in prize design. It’s no longer an issue of whether we like “gig work” or not. Already 35% of the US workforce are at least partially reliant on it and that looks set to rocket in coming months.

Any XPRIZE focused on improving control, stability, progression and protections for the irregular workforce could impact profoundly and quickly. The impact could last far beyond training thousands of people for jobs that as Matthew says (above) may not be there a year later.

As some of you know, I ran the British government programs Beyond Jobs to raise standards, alignment and prospects for this workforce. Long story short: sustainably, scalably, tackling their many problems requires new “connective tissue” between those who hire this labor and people who provide it.

Every other issue - how to build responsive life-long learning, stopping exploitation, attracting activity out of shadow economies, misclassification, low-pay, lack of benefits, limiting the growth of “gig work” – is subsidiary to the point above.

If the infrastructure that aligns buyers of labor and the providers is controlling, commoditizing, secretive, maximizing profit extraction and frequently unstable, there’s little point taking other measures to help people. Currently the infrastructure is all of these things.

How is the infrastructure unstable? Ask anyone who was cleaning houses through Homejoy, or working through thousands of other for-profit labor markets that went bust and vanished overnight.

Some people think Uber’s a one off. But this is the most highly valued private company ever. They’re a pathfinder for all sorts of start-ups operating short-term labor markets. Less visibly, companies like Kronos allow corporates to schedule and control their huge workforces with all sorts of sophisticated new tools.

One-sided infrastructure for those in irregular work isn’t a peripheral issue. As low-skill workers have their options limited and pathways to progression cut off, labor gets cheaper and more malleable. So the case for companies creating jobs weakens.

Try telling a corporate Financial Director under pressure from Wall Street why she should take on the liabilities and fixed costs of traditional employment. Multiple companies allow her managers to “tap the app” to get staffing on demand, possibly with an algorithm calculating the lowest legal wages that will staff up their stores/cafes/depots/construction sites/carehomes/hotels today.

We need an alternative to the race to the bottom enforced by current models for fluid labor. That model is compelling for buyers of labor.

This is a huge subject and I don’t want to go on about it if there’s a real emotional attachment to traditional jobs in this group. We may get lucky and the low-skilled will see a return to security, progression and regularity in their work lives. I don’t see any data supporting that view, but it could happen.

If there’s willingness to consider less desirable alternatives then X-PRIZE could really shift the dial for some very hard-pressed people. It could also recognize that about 20% of the workforce can only work irregularly.

These are folk with unpredictable medical problems, family commitments or studying that means they aren’t blessed with 40 hours of availability for work a week. One more “Quality Jobs” program, from XPRIZE, will just marginalize them further.

Imagine we are heading for a world where very few of the low-skilled will have a full time job. What does the infrastructure for that labor market look like if those people are to be supported, skilled and eligible for targeted interventions to support their progression?

What data must the infrastructure produce to maximize alignment with local needs and opportunities for progression? How does it handle benefits? How can it be locally, accountably, controlled? Where do public services and public assistance interface? How might unions initiate new services cost-effectively for this workforce?

This should just about be do-able. But it has to be attractive to buyers of labor to tempt them into a genuine “public option” sitting alongside the Ubers, Homejoys and Kronos’s out there. What’s going to persuade them to buy in a market that levels the playing field for workers?

This will take more than tech. It involves governments, educators and stakeholders across the labor market. But a prize that said something like: “Create an empowering ready-to-go platform, get buy in from diverse stakeholders including employers (large and small) and a demonstrable route to launch in cities with a combined population of 10m” would galvanize an effort like nothing we’ve never seen before.
3